Welcome to part one of a series of trips down Memory Lane revisiting Wrexham AFC’s most iconic European ties.

I’m not a native Wrexhamite so it took a few visits to the Racecourse Ground for me to become truly aware of just what a historic stadium it is. Overhearing two supporters reminiscing about Wrexham’s European history while watching the recent home game against Stockport County sewed the seed in my mind. A few days later I got the final push I needed when my sports memorabilia contact Rob Williams, who knows about my love for Italian football, showed me a programme he’d got hold of for the home game against AS Roma in 1984. A bit of research revealed this tie was just the tip of the iceberg as far as Wrexham’s Continental exploits were concerned. I knew then I needed to put together a set of stories about their biggest European nights and what better way to start than the two ties against Porto in the 1984 Cup Winners’ Cup?

Wrexham’s introduction into the competition that year was a little inauspicious to say the least as they had actually lost the Welsh Cup final the season before. They had lost over two legs to Shrewsbury Town and had only qualified for Europe because Shrewsbury were ineligible for the Welsh place due to them being an English club.

Porto, on the other hand, were a truly major European force at that time: the majority of the team would go on to win the European Cup three years later against Bayern Munich. They had provided the backbone of the Portuguese national team’s representation in the 1984 European Championship and had taken France, the eventual winners, to extra time in a truly amazing semi-final losing 3-2. They had also narrowly missed out on winning the Cup Winners’ Cup the previous season losing 2-1 in a very close game to a mighty Juventus team featuring six members of the Italian World-Cup winning side of 1982. That Juventus team was so good, it would win the 1985 European Cup in the ill-fated final against Liverpool in the Heysel Stadium in Brussels. 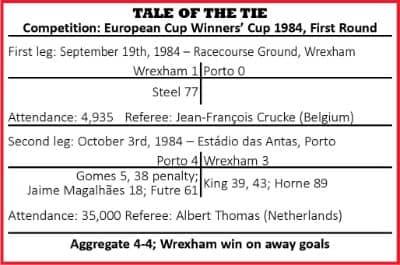 My friend Morris, who went to the home game, takes up the story:

The mid-eighties were a tough time to be a Wrexham fan. The glory days of 1978 already seemed like a distant memory, Division Two had become Division Four in a matter of seasons, crowds were small and money was tight. In the face of all this adversity, however, the club somehow managed to pull off one of the greatest moments in its history, a cup shock often forgotten, but which surely ranks against any of modern times in European football. After the draw was made, the excitement in Wrexham was high, but it would be fair to say expectation was low. Porto’s nickname is ‘Os Dragões’ – The Dragons – so fighting fire with fire it was, then! 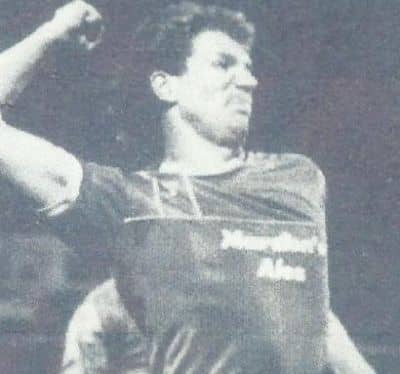 Jim Steel celebrates after his first-leg winner against Porto

The first leg was played under the lights at the Racecourse and just under 5,000 were present to witness what would become a famous night. Wrexham gave as good as they got, but luck was also on our side – Porto hit the woodwork three times – and as the night went on, confidence grew and our young midfielder Barry Horne (more about him later) hit the crossbar with a dipping volley. Then, with 10 minutes to go, the shock was on: substitute John Muldoon whipped in a cross from the right and Jim Steel, our burly Scottish striker, glanced home a header at the near post in front of the Kop. A tense last 10 minutes followed, but the pressure was soaked up and the final whistle went to signal one of the great results in the club’s history. 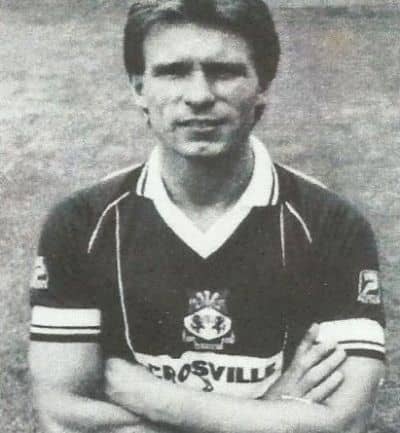 Captain at the time: Jake King

The tie wasn’t over though and a second leg in Porto awaited – surely it was asking too much to qualify? A hardy bunch of Reds fans made the journey, but in torrential conditions in front of 35,000 fans at the Estadio Das Antas, things started badly and Porto raced into a 3-0 lead. Things were looking grim, but out of nowhere the comeback began – captain Jake King scored two quickfire goals just before half time and we were suddenly ahead over the two legs. The second half saw Porto grab a fourth through Portuguese legend Paulo Futre and the Reds looked to be heading out, brave but not disgraced. It was the 89th minute when the miracle happened: David Gregory swung a cross over and Horne spectacularly volleyed home off the post to turn the tie back in our favour. Now ahead on away goals, the Reds held out for the remaining few minutes and a footballing shock for the ages had occurred. Bobby Roberts’ men had done what had seemed impossible and beaten one of Europe’s superclubs. Celebrations continued long into the night and the draw for the next round brought even more excitement – Italian giants AS Roma were to be next!

Please pick up a copy of our December edition for the story of what happened against the Italians. Many thanks to Rob Williams and Morris for their contributions and the two guys sitting behind me at the Stockport game for providing me with the inspiration to look into the stories in the first place!