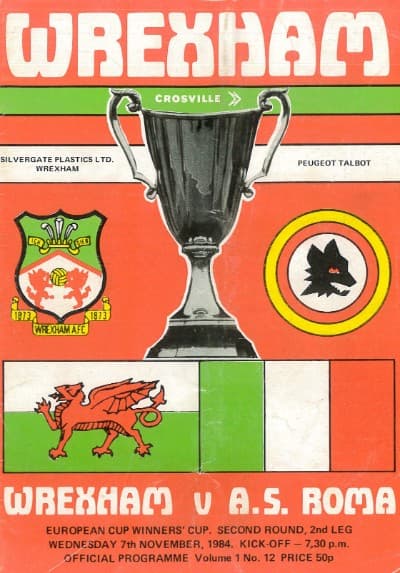 We hope you enjoyed reading about Wrexham’s heroic exploits against FC Porto in our November edition. I enjoyed compiling the article so much I wanted to get straight onto the story of what happened in the next round. Our resident Wrexham AFC expert, Morris, takes up the story:

Wrexham’s victory over Porto had taken us through to the last 16 of the European Cup Winner’s Cup and the reward for that incredible result was a draw against the Italian giants, and then one of Europe’s super clubs, AS Roma.

Roma had squeaked by perennial European participants Steaua Bucharest 1-0 on aggregate in the previous round so they weren’t looking invincible in spite of their pedigree. They had nevertheless won an incredibly competitive Serie A title in 1982-3 and just six months before the tie against Wrexham, had been beaten in the European Cup Final on home turf by the great Liverpool team of the mid-80s – with Bruce Grobbelaar’s wobbly legs spooking the Romans and then Alan Kennedy putting them to the sword in a memorable penalty shoot-out – so this was as tough an opponent as the Reds could have wished to face.

This Roma side contained some true legends of world football, including 1982 World Cup winners Bruno Conti (surely the player of that tournament along with Paolo Rossi) and Francesco Graziani. Even more impressively, they had two of Brazil’s flamboyant superstars from that same World Cup: Toninho Cerezo and Paulo Roberto Falcão. So good was Falcão at that time, he’d have had a strong case for inclusion in a World XI team. Carlo Ancelotti (yes, he of the famous quizzical eyebrow) was also in the Roma line-up. He was a talented play-making midfielder at the time and went onto European Cup glory with Milan a few years later. They also had future national team midfield general Giuseppe Giannini on the bench. He would make his mark in the 1988 European Championships and the 1990 World Cup. They were coached by one Sven-Göran Eriksson who was just 36 at the time! I wonder what became of him? 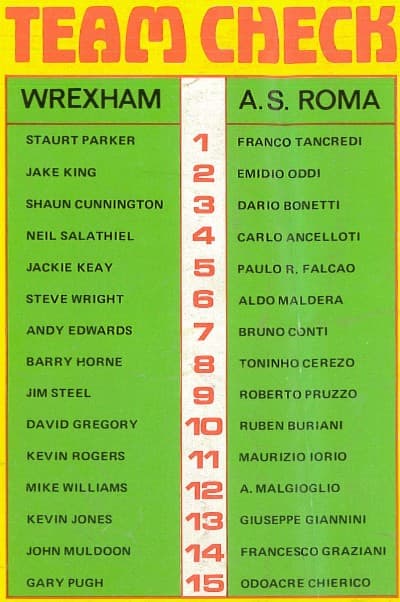 The Town went into the first leg at Rome’s Olympic Stadium on the back of two league defeats, but as always, we raised our game for the big cup-match occasion and gave the Romans a tough game. The match was goalless until the 37th minute when Roma were awarded an extremely dubious penalty for handball (even modern-day VAR wouldn’t have been able to spot it), which was buried by Roberto Pruzzo (he’d scored Roma’s goal with a glancing header in the aforementioned European Cup final against Liverpool). You can find grainy YouTube highlights of the incident and I still dispute the decision 35 years on! Still the Reds kept battling, even creating a few half chances, but unfortunately, we couldn’t make the breakthrough and shortly after half-time, Roma doubled their lead with a 30-yard blockbuster from the classy Cerezo. The game finished in a valiant 2-0 defeat – another great effort from the Lads and everything was set up for another famous Racecourse night under the lights.

Alas, this time it wasn’t to be, however. Just over 14,000 crammed into the ground to see the home team appear in unfamiliar white shirts (I’m not sure that this has ever happened in a home match since). Again, the performance was one make your heart swell with pride – Jim Steel came close in a first-half Kop-end scramble, but overall Roma looked a class act and did just enough – Falcao strolled around dictating the game and eventually it came as no great surprise when the two Italian World-Cup winners combined, Bruno Conti putting in a precision cross and Graziani heading in the winner with 15 minutes to go to end our hopes of another miracle result. It was another huge night in the club’s European history though – again the club had done the town proud and it had been a month to remember for the club’s loyal supporters.

As a footnote, Roma went on to lose heavily to Bayern Munich in the next round 1-4 on aggregate. Bayern were in turn knocked out by Everton in the semi-finals and, as you may remember, the Toffees then swept aside Rapid Vienna 3-1 in the final to win that fateful 1984-5 European Cup Winners’-Cup competition that Wrexham had played such a massive part in.