Children at a Gresford nursery will be making the most of unwanted wooden pallets and old truck tyres donated by a Wrexham distribution firm. 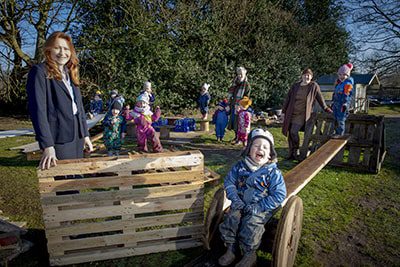 McCarthy Distribution, based on Wrexham Industrial Estate, delivered the items to Homestead Nursery where they will be used to construct treehouses, adventure trails and work stations.

The new partnership started after Homestead Nursery co-owner Kim Sankey-Jones met Mike McCarthy, McCarthy Distribution Managing Director, and his wife Louise, Marketing Manager, through a mutual friend. She told them about her Reggio-inspired nursery which focuses on outdoor learning and using natural materials and reused items during playtime to encourage children’s innate curiosity and imagination. 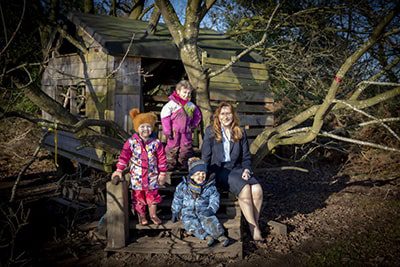 Kim said she hoped the link-up would be the first of many with other local businesses who have items they no longer needed. Louise went along to the nursery to see for herself how their donations would fit in.

Louise said: ‘Mike and I were very impressed with the passion Kim has for her nursery and the style and ethos of their early-years learning. It’s an exciting new partnership for us and we were delighted to contribute to the children’s enjoyment.
This is a novel way for us to look at how we find ways of reusing things we have at our warehouse and stop some of them from ending up in landfill. With Homestead only a short way away, we are not racking up too many miles finding them a new home either. 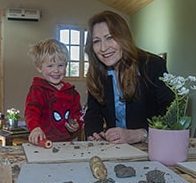 ‘The nursery has such a homely and welcoming feel. It’s bursting with all sorts of creativity and the children all look so happy and engaged. It’s a wonderful environment with an amazing array of natural materials available.’

Kim said: ‘We are always on the look-out for all sorts of different things. It could be printed material, unbroken tiles, bottle tops, candles or old jewellery or larger items like the pallets. We are open to suggestion and would welcome any businesses to talk to us about items they would like to find a new home for.’ 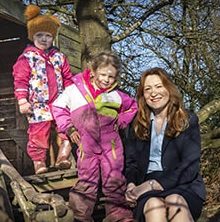 The pair, both mothers of three, have been friends since their daughters started a local playgroup together. They became so frustrated in their previous jobs at being unable to put their research-based beliefs about pre-school care and learning into practice, they decided to create their own childcare setting. We designed the nursery to encourage children’s innate instincts to explore and investigate and has the motto ‘Give your child the best day every day.’ 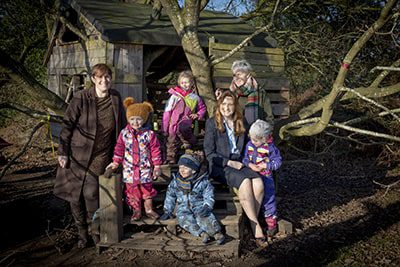 It follows the principles of the internationally-admired Reggio approach for early-years education. Reggio views young children as individuals curious about their world and with the potential to learn from all that surrounds them.

They spent considerable time planning the sensory-driven environment for their nursery. They visited and worked at a nursery in Northern Italy where the Reggio approach originated to learn about the system which dictates that the environment is a child’s third teacher.

Rachel added: ‘At Homestead, we have very few plastic toys. We prefer to focus on natural products so children can use their imagination about what to create or how to play with them. It’s all about encouraging the children to be independent and explore the world for themselves. It’s lovely to watch how inventive and creative they are.

If you are interested in donating unwanted items or stock to Homestead Nursery, call 01978 853 946 or email enquiries@homesteadgresford.com.

Nightingale House as Active as Ever!