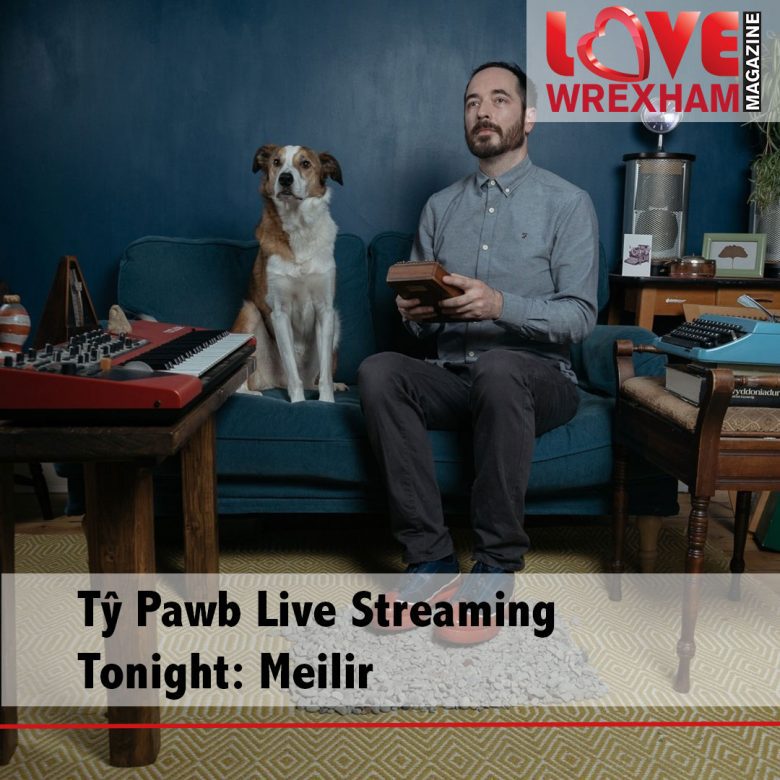 Join Meilir tonight to celebrate the release of his album In Tune via live stream hosted by Tŷ Pawb!

They can’t wait! See you at 7pm sharp!

Acclaimed experimental singer-songwriter Meilir has announced the release of his captivating debut album. In Tune is available via Gwdihŵ Records (Goo-dee-who – the Welsh word for owl) at all DSPs and streaming services.

Produced by Charlie Francis (REM, The High Llamas, Sweet Baboo) at his Loft Studio in Cardiff, In Tune, Meilir’s eagerly anticipated debut album has been a long time coming, but promises a thrilling and exciting musical journey for the listener. In Tune rewards repeated listening so you can really get under the skin of these thought-provoking compositions.

“My records are very personal to me,” says Meilir, “one of the reasons they take so long for me to complete, I think. There are themes on the album In Tune that carry on from my first records. I suppose that the music I write is like a soundtrack to my life in a way.

Meilir is one of contemporary music’s most provocative and audacious new artists, melding expert songcraft with a fearless lyrical approach and wildly eclectic sonic sensibility. Born and raised in Flintshire, North Wales, he first made waves in his youth as a classically trained pianist and vocalist. Despite his early success, Meilir grew frustrated with the classical world’s artistic limitations, yearning instead to create something altogether his own. He co-founded cult Cardiff combo Manchuko, making their live debut with a nationally broadcast appearance on the Welsh-language free-to-air television channel, S4C.

Still, Meilir continued to feel creatively constrained and in 2009 began crafting his own unique music. He crafted innovative soundscapes with an idiosyncratic blend of piano, electric guitar, and assorted synthesizers with such unlikely instrumentation as a thumb piano, an antique typewriter, wine glasses and even a tray full of gravel.

A series of critically acclaimed singles and EPs followed, including 2009’s Bydd Wych, 2011’s Cellar Songs and the 2014 single, “Arabella,” all available now via meilir.bandcamp.com.

The single “It Begins” in 2019 followed the 2018 single, “Glasshouse”. “Glasshouse” featured on Killing Moon Records’ influential New Moons Vol X compilation. It is available for streaming and download.

Meilir is as resourceful on stage as he is in the studio. He has been hailed for his intimate and imaginative live performances. Aside from headline shows, Meilir has opened for The Joy Formidable on their sold-out European tour. Additionally, he has supported such like-minded artists as Cate Le Bon, Tiny Ruins, Faust, and the legendary Michael Rother (NEU). Also he has appeared at festivals spanning Green Man, FOCUS Wales, Edinburgh Festival Fringe, and Llangollen Fringe Festival.