The President’s Annual Concert on 29th February will go down as one of the great nights in the annals of Wrexham Symphony Orchestra (WSO). 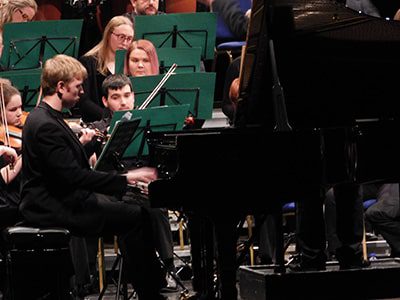 Despite mother nature’s best efforts to disrupt proceedings, a large audience witnessed an outstanding rendition of Beethoven’s Piano Concerto No 3 by 24-year-old Luke Jones, one of Wrexham’s most exciting young musical talents. In the year which marks the 250th anniversary of one of the world’s greatest composers, the audience rose to recognise the brilliance of the collective musicianship. The acclaim was such that Luke performed three encores of music by Rachmaninov and Scarlatti.

Conductor Mark Lansom enthused about the overall performance: ‘It was very special to work alongside Luke. Rarely have I heard playing of such clarity and the Orchestra responded to his sound splendidly. The whole performance was justly rewarded with one of the most spectacular ovations we have ever witnessed and we look forward to working with Luke again in the very near future’.

Professor Maria Hinfelaar, Vice-Chancellor of Wrexham Glyndŵr University and honorary President of WSO said: ‘I thoroughly enjoyed the concert; the spectacular sounds of Berlioz’s Symphonie Fantastique were still ringing in my ears the following day. We are privileged to have such a talented group of musicians on our doorstep. The ensemble fully deserved their standing ovation.’

Luke was delighted to be performing with his hometown orchestra: ‘It was particularly pleasing to see a good-sized audience which included members of my immediate family. Working with the Orchestra has been an enjoyable experience and I am looking forward to performing with them again. The standing ovation was very humbling and encouraged me to play the three additional pieces.’

Achille Jones, himself an accomplished classical guitarist and music teacher, was proud to see his son perform in Wrexham commenting, ‘It was a pleasure to witness Luke giving such a highly-polished recital. The dialogue between soloist and orchestra was well communicated to the audience, who responded with a standing ovation. The performance filled me with immense pride’.

Another Great Year for Wrexham Carnival of Words