In January 1876, the Duke of Westminster promised to become a guarantor for the sum of £100 for the Wrexham Art Exhibition which was to take place in August. In March the same year at the closing ceremony of the Rhyl Eisteddfod, the President stated that he was very pleased to know there was to be an Arts and Treasures Exhibition and that this would be held in connection with the Wrexham Eisteddfod.

By April, notices were placed in newspapers stating that “Applications for Space in the Industrial Department for Exhibiting Works of Modern Art and Inventions of a Scientific and Domestic Nature (if practicable in operation) are requested as early as possible and tenders are invited to supply refreshments of a superior kind for a period of three months.” The exhibition was due to open on July 15th, 1876. 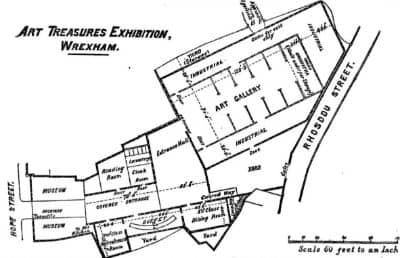 In May, a meeting of the Executive Committee was held in London. Those present were Major Cornwallis West, Chairman; Mr Charles Bowyer; Mr John Thomas, musical director; and Mr W Chaffers, general superintendent of the South Kensington Museum. Musical arrangements were discussed and it was decided that Messrs Gray and Davidson should erect “a fine and powerful” organ in the orchestra to give fine effect to the grand music of Handel, Hayden, Mozart, etc aided by choirs from Wales and the border counties.

Mr Chaffers told the committee that he had acquired a most important collection of over 2,400 engraved gems formed by a gentleman who had spent over 40 years in the pursuit of his craft and that he was also cataloguing a collection of gothic iron work, which was made in Italy and France and illustrated the art of the iron workers from the 11th to the 17th century.
Many other collections had been secured: paintings from many important collections, including Gainsborough, Turner, Wilson, Van Dyke, bronzes, English and foreign china, prehistoric flint weapons, Wedgewood jasperware and much more.

A report on the construction stated: “50 men are constantly employed in the erection of the large structure in which is to be held the forthcoming Art Treasures and Industrial Exhibition. The building of which Mr Kennedy is the architect and Mr WE Samuel is the builder is approached by a main entrance from Hope Street with Mr Low`s new premises forming a frontage to the pavilion. On either side of the entrance is the museum which will occupy the whole of Mr Low’s new premises with a covered way 78 feet long, leading into the entrance hall, thence into the art gallery which is 130 feet x 70 feet, the whole area being 10,380 feet.”

The bottom end of the art gallery where the organ and orchestra were situated was 33 feet high with a zinc roof with 25 dormer lights in addition to skylights.

There was also a reading room, retiring room with a lavatory, a second-class refreshment room and buffet. Another room led to a first-class refreshment room. A large stained-glass window faced the main entrance in Hope Street and a road was built 15 feet wide from Egerton Street for exit only.

The exhibition was opened in July by the Duke of Westminster and by then many more exhibits had been acquired. Contributors included Mr WE Gladstone, Sir WW Wynn, Sir R Brooke, Earl Denbigh and Lord Penrhyn. Sir Reginald Cholmondley was the largest contributor with no fewer than 41 paintings on show. 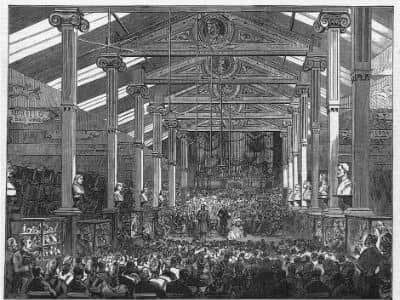 The Duke expressed his disappointment that the Prince and Princess of Wales were unable to attend the opening of the Exhibition and the Eisteddfod due to take place the next month. He expected that the number of visitors would be about 1,000 each day which would ensure the exhibition’s financial success. The event was then declared open and a vocal and instrumental concert was given with Mr Best presiding at the organ and Mr J Thomas conducting the band. Madame Edith Wynne had been announced to sing, but was suffering from ‘hoarseness’ and was unable to attend.

In August, a report in the Wrexham Advertiser on the exhibition stated that the attendance was not as high as expected and that it was possible that many people were not aware of the ‘great musical treat’ in the Art Gallery. No expense had been spared in securing the best artists of the era: Madame Sinico, Mr Vernon Rigby, Signor Campobello were among the vocalists; Miss Bessie Waugh on the pianoforte; Mr John Thomas at the harp; and Mr Edwin Harris at the organ. Also appearing was the Birkenhead Cambrian Choral Union along with the band of the 106th Regiment.

The Chester Courant said that regret was felt when they heard of the low attendance. The art exhibition was one of the best ever held in the provinces and that the only thing wanting to ensure success was the support of the public. It was felt that if such great effort had been met with scant recognition and it would be said by many critics that the people of North Wales are indifferent to the fine arts. It was hoped that large employers in the area would stimulate their workmen to visit, and that on certain days schools would be allowed to attend.

When the exhibition ended on Monday 27th November, it was stated that in the four months it had been open, over 80,000 people had attended.

The Singer-Songwriter Who Traded the City for...

Caergwrle Castle – Welsh History on Our...