In part two of our story about one of Wrexham town centre’s most recognisable buildings, we are up to October 1892. We see The Inland Revenue were evidently active around that time too:

October 1892: “Mr Lyons. Inland Revenue Supervisor, charged John Hughes, Central Arcade, Wrexham, with selling silver plate beyond a certain amount without a licence, as required. WJ McFarland, Inland Revenue Inspector, Chester, said he called at the defendant’s shop and asked for a silver Albert, which had a Hall mark, and was beyond the specified weight. Witness paid 12s 6d for it.

Defendant had not got a licence. He produced the Albert. Mr Lyons said he had been receiving numerous complaints from other jewellers in the town about the defendant not having a licence and considered it very unfair that defendant should carry on business that way. He was fined £3 3s with costs.” 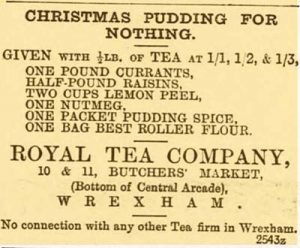 In December 1895, The Royal Tea Company were giving Christmas puddings away for free. It does look like you had to make it yourself, however!

It’s now October 1900 and petty theft is still a problem!

“James Mitchell (ten), was charged with having stolen nine whistles of the value of 1d each. Robert John Smith, draper, who carries on business in the butchers’ market, stated that he locked his shop, which was at the bottom of the Central Arcade, on the night of the 13th inst.

When he opened it again on the following Monday he found nine whistles, had been stolen, He gave information to the police, as there had been a great deal of pilfering of late. PC Watkins deposed to having seen defendant on the 22nd inst.

Bench discharged the boy upon the father undertaking to properly correct him.”

Life in the arcade had its moments as described in December 1900: 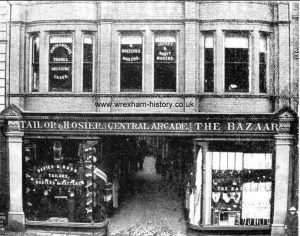 “On Wednesday, Mr Ashworth, tobacconist, Arcade, had an extremely narrow escape from a serious accident. He was standing by his door and had just turned to re-enter his shop when a large piece of glass, from the roof of the Arcade, fell exactly on the spot where he was standing. The glass, which was of great weight, shattered to pieces. It appears that a workman on the roof had accidentally put his foot through the square causing it to fall.”

Many shops have been and gone. Some of them are, in no particular order:

“Brick with terracotta dressings, slate roof over frontage building, glazed roof to arcade. Frontage building has three-storeys and attics. Three window range with central entrance to arcade flanked on each side by shops.

Outer canted oriel windows above, central paired sashes with pediment carried on brackets and enriched with terracotta relief. Windows are all two-pane sashes.

Pedimented attic windows each side of central pediment which has the name (Wrexham Arcade) and date in relief. Dutch gables to either side. 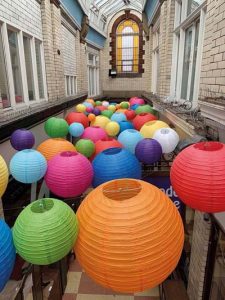 Many thanks to Peter Eames for the architect plan and Daphne Roberts from Abode Above and Nick Roe for their images.

Annette Edwards did an incredible job of researching this article for wrexham-history.com.

We hope you enjoyed our Wrexham Central Arcade retrospective. To read more of our history articles about Wrexham town and county, click here.

From Coedpoeth to Colorado: One Woman’s Journey

Caergwrle Castle – Welsh History on Our...