Come with us on a supernatural journey through some of Wrexham’s most haunted pubs, hotels and halls! These are just the ones we’ve heard about. Watch out, maybe there’s something ghostly right behind you where you’re reading this!

With Halloween approaching, see how our county has no shortage of spooky places… 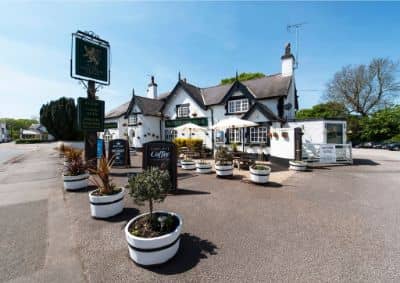 The Golden Lion in Rossett dates to between the 17th and 18th centuries. It was a coaching inn and a popular stopping-off point for people travelling between Shrewsbury and Chester.

Inquests were often held here. The legend has it that a local ploughman by the name of Jeffrey was hung in Ruthin for the murder of a farmer. His body was transferred to Rossett. It was also displayed on a gibbet close to the coaching house as a deterrent to other criminals. Unsurprisingly, having a cadaver so close to the inn had a detrimental effect on trade. Locals took it upon themselves to release the body from the gallows.

A metal bar taken from the scaffold is supposedly still in one of the pub outhouses. The wooden pallet carrying Jeffrey’s corpse was subsequently used in the construction of the establishment.

Jeffrey is now said to haunt the building and turn glasses and chairs upside down in the bar area. If you are looking to stay the night, be aware that he is particularly fond of bedroom number two!

Marford is a well known haunted place. Several houses in the village incorporate crucifixes or have cross-shaped windows to ward off evil spirits. Margaret Blackthorne or ‘Lady Blackbird’ is the best-known supernatural resident. Viciously murdered in 1713 by her husband George, steward of the Trevalyn estate. Locals often report seeing her spirit roaming the village.

The Trevor Arms is a Grade II listed building which was a significant coaching inn in its day. It also consists of a stable block which has since been converted into several guest rooms.

Room 30 is said to have a powerful vortex that serves as a portal to the underworld. Some visitors have reported it contains a strange energy. Other spirits include a cavalier, a young girl and a woman that sits by the fire in the bar area. Some guests have reported seeing drawers open by themselves.

One of the more colourful stories involves a Victorian man with muttonchop sideboards and wearing a leather apron. A resident who saw him after hours asked him to leave to which the man replied ‘make me’ before vanishing. Rumours are he haunts the stables after being killed by a kick to the head from a horse.

Pen y Lan Hall is another Grade II listed gothic building built in 1690 by the founder of Lloyds Bank. The hall is said to contain several ghosts. Many of them children and the screams of a crying baby can be heard in the dead of night. Guests report the sound of footsteps and voices coming from empty rooms.

One particularly interesting story is that of a spirit who is said to have saved a child from drowning in the River Dee, after he appeared on a bridge some years ago.

Paranormal investigators also carried out a Ouija board experiment which yielded intriguing results. The glass repeatedly moved to one participant and began to spell out her full name. It soon emerged that three members of her family were attempting to communicate with each spelling out their name.

The investigation also revealed via a medium that there were two female spirits called Annette and Katherine in the room. Annette recalled choking at the table that the group sat around. Soon afterwards, the sound of music was heard playing through one of the recording machines for several seconds. The spirits successfully answered other questions, including where they were from, what age they were, what house number they lived at and also the name of their cat: Waffles!

A paranormal investigation group has also taken some ghostly images. The first image shows what appears to be a young boy in black staring out of a window. Another one captured in the grounds of the home features the ghostly face of a young girl. Her with eyes, nose and mouth are clearly visible.

Plas Teg is an imposing and hugely impressive Jacobean property sitting rather imperiously on the A541 from Wrexham to Buckley. It is known as the most haunted house in Wales and they hold regular ghost hunts plus weekly tours.

It was built by Welsh politician Sir John Trevor in 1610. There are believed to be more than 15 ghosts walking around the house. This was used as a local court where people were tried and hung.

Even just walking onto the grounds feels like you’ve gone back in time and its history is full of spooky stories. There is a story of a woman in a black Victorian dress stepping out in front of a startled driver on the main road running past the house. The lady concerned braked and swerved abruptly to avoid her. Convinced she had just run somebody over, the driver rushed to check behind the car, but was mystified when she realised no-one was there.

There is a legend that Dorothy Trevor, a 16-year-old heiress and daughter of the first Sir John Trevor, fell in love with a local farmer’s boy. They decided to elope because her family did not approve. She took her jewellery and hid it in a box near a well planning to take it with her. When she went to retrieve it, lost her footing, fell into the well and drowned. It is said that the ghost of the girl now wanders the woods around Plas Teg looking for her lover.

A teenager named Elizabeth Trevor-Roper, who died in 1815 at the age of 16. Was believed to have been pushed down another well by a man whose love she spurned. She is also said to have been seen running through the house’s corridor.

A landlady at the pub reported the ghost of a dead child had been playing with a balloon inside her pub. She also even managed to capture the eerie moment the balloon travels on camera. She was closing one evening when she spotted a blue balloon hovering inches from the floor. When the film was made, there were 20 other balloons which had been filled with helium gas in the same room… although none were moving. The landlord reports how they had just locked up and were about to go to bed when they saw the balloon start moving towards them. At first, they thought it might be a draft, but all the windows were shut. This was not an isolated incident: there have been reports of glasses flying off the bar, barrels mysteriously falling off shelves and staff prodded in the back.

One patron has also told how she had felt what she thought was a child clutching her leg while she was at the pub. Only to discover there were no children present in the venue.

Brynteg family and the ‘most haunted house in Wrexham’

One Wrexham couple finally decided enough was enough when they and their children moved out of their home. Dubbed ‘Wrexham’s most haunted house’. They first noticed the strange activity in 2008 when they first moved in. After that, their life turned into a nightmare as strange happenings continually disrupted their lives. They had so much interest from paranormal enthusiasts – including Australia and the United States. Rather than selling at the time, they planned to rent out the property for ‘ghost weekends’.

The wife describes seeing a little boy in a downstairs room who started walking towards her and then vanished. The couple also talk about one night when their bedroom floorboards began to creak and the door handle rattle. This was something that started to happen most nights. Horrifying noises came from an empty room downstairs. As well as the sound of chairs being dragged along a stone floor.

People visiting the house also talk about seeing things. The little boy, an older woman and something described as not being human. Plenty of friends of theirs who stayed in the house refused to spend the night there again.

Luckily for them, these happenings started to decrease when a local vicar came and blessed the house.

The old Thirsty Scholar pub, later Arnolds and now the Ijazz, has also featured in its fair share of ghost stories.

There was a report of the owner of this pub calling in the services of a vicar after staff and customers claimed a ghost was inhabiting the building. The Reverend carried out blessings at the pub which is said to have been a mortuary at one time. It is believed there is an underground tunnel in the cellar leading to the former War Memorial Hospital.

Staff and customers have reported bizarre behaviour, including objects flying across rooms and strange thudding noises. Crisps being thrown, glasses breaking in customers’ hands, doors opening and shutting for no reason and the atmosphere would also go cold.

Again, after the visit by the vicar, the number of happenings decreased.

The Wynnstay Arms in Ruabon is a former coaching house dating back to the 18th century. Some staff refuse to go down to the pub’s basement. A ‘white mist’ has been seen moving from wall to wall and footsteps could be heard when there was nobody else there.

The Britannia Inn at the foot of the Horseshoe Pass has also had reports of strange activity. There were claims a ghost of a monk was walking the halls in the dead of night.

One medium stated they felt fingers grasp their throat while connecting with an old landlord from the 1800s. A lady who had worked at the inn called Margaret Jones, described as a “lovely spirit”. Also, two Cistercian monks were seen near a fireplace.

The Royal Oak on Wrexham High Street has also been the venue for a séance. They contacted a little girl with Down’s Syndrome. Investigations in the past few years have seen hauntings at more modern places. This includes the Atik nightclub in the town centre. Rosemarie Frankland – The Miss World From...