Wynnstay Place – now occupied by Bowen, Son and Watson – has an interesting history. It stands on the corner of King Street and Regent Street and was first named on an 1833 map of Wrexham, but according to AN Palmer, King Street was laid out in 1828 and was the first residential street formally built in Wrexham. The seven houses closest to Rhosddu Road were called Gwersyllt Place and were owned by Richard Kirk Esq of Gwersyllt Hill.

In Pigot & Co’s Directory of 1828-29, there is no mention of King Street, but among the names listed are two in New Street: “Nobility, Gentry and Clergy” – Captain Thomas Watson and “Academies and Schools”, a boarding a day school owned by a Miss Kendall. 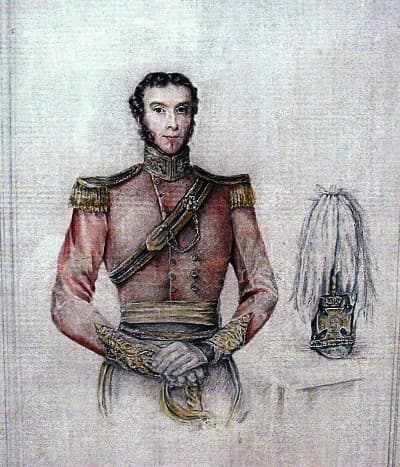 The first owner of Wynnstay Place was Thomas Creswick Watson who was born in Yorkshire. Watson joined HM Third Light Dragoons and was promoted to captain in 1811. He later became a Captain and Adjutant in the Denbighshire Yeomanry Cavalry and died in London in April, 1831.

When he died, his property Wynnstay Place was valued at £3,200 and he had nearly £4,000 invested in government bonds. A substantial sum at that time.

His son, George Watson, was born in 1795 and became a Lieutenant in the same regiment as his father. George retired on half-pay and he and his wife emigrated to Australia in 1839. He died on 4th July, 1866 at “Wynnstay”, Lexton, Victoria, Australia. It’s interesting that he named his home after Wynnstay in Wrexham.

His obituary was published in The Ballarat Star.

“This gentleman entered the army from Sandhurst Collage, at 17 years of age, receiving his commission in the Third Light Dragoons (King’s Own). He was ordered for active service in the Peninsula, fighting as a lieutenant in the same troop and by the side of his father, Captain Thomas Creswick Watson, at the battle of Toulouse.”

Over the years, the larger part continued as a ladies’ school.

Miss Sadler is said to have been there 20 years so that takes her back to about 1835. Prior to that, the previously-mentioned Miss Kendall had a Boarding and Day School in New Street. The Rev John Kendall, Mary Kendall’s brother, was the master of the Grammar School on Chester Street.

The next occupant was listed in the Wales register and guide of 1878 as Mrs Simms, Wynnstay House, 1 King Street, Young Ladies’ Boarding and Day School.

Anne Shore had been born in Liverpool about 1831. Her father was William Shore, a joiner from Overton, her mother, Margaret, was from Liverpool.

Annie’s husband, Edward Bishop Simms, was a Professor of Music from Birmingham. His brother had been the organist at St Giles and after his death Edward Bishop replaced him.

Annie married Edward Simms in January 1861. It was a double wedding as her sister Jane married at the same time. Their father was the late William Shore of Rhosddu Cottage.

They left Wynnstay House/Place and moved to Chester Street where Annie died in October 1890.

By 1895, the name of the school had changed to The Wrexham High School for Girls.

Who was Miss Pierce? In the 1891 census at 1 King Street, there was William Pierce, a cabinet maker, wife Mary and their four daughters who all had been born in Wrexham.

Annie 34 was a school governess and her younger sisters Margaret, Elsie and Ella were teachers. Caroline Graf was a teacher of French and had been born in Switzerland. There were four pupil boarders, a cook and a servant. Annie’s full name was Julia Annie and at the age of 24, she was already a certified schoolmistress. William and Mary’s eldest son was James Hopley Pierce, who became a well-known solicitor in the town.

In 1901, Thomas Richard Voyce was living in Ruabon Road. He was a commercial traveler in the printing paper trade. He lived there with his wife Florence and four children.

In 1911, the Voyce family were still at the Westminster Hotel, 1 King Street. It had 17 rooms. Because of the size of the place, it’s pretty sure it was previously the Wynnstay Place school and that a new hotel hadn’t been built after all.
The King Street property was eventually bought by the Education Authority and used as a student hostel. Part of it was used by local authorities. It was later used by various companies as their office and some small businesses were situated there.
Some alterations were made when bay windows were added to the Regent Street frontage and a corner entrance has been made. Apart from that, it’s a very good example of a Georgian House.

This article was originally researched by Annette Edwards and adapted from the original post on Wrexham-History.com.

Many thanks to John Townson for the information on the Watson family and to Cari Pugh and Judy Roberts for their help with some of the research.

A Short History of Borras Airfield

Flora and Fauna Abound in the Clywedog Valley

The Rich Heritage of the Clywedog Valley