Part One of Wrexham Central Arcade: A Retrospective

This is the first in a two-part retrospective of our beloved Wrexham town-centre Central Arcade. The idea of an arcade leading from Hope Street to the Butchers Market first started about 1890. Subsequently, local businessmen founded The Hope Street Arcade Wrexham Arcade Company and sold shares to fund the plans claiming it was a good investment for the future.

The Wrexham Advertiser first announced the plans for the arcade in August 1890:

“We are much pleased to learn that the arrangements for proceeding with the construction of the projected arcade from Hope-street with an entrance into the Butchers’ Market are making favourable progress.

On Tuesday the agreement between Mr Charles Davies, the proprietor of the premises forming the site of the arcade, and the Wrexham Market Hall Company duly sealed and completed the necessary permission to construct the entrance into the market at a meeting of the Directors.

When we consider the existing great demand for business premises in the centre of the town, and having regard to the; exceedingly central situation of the arcade, and the accommodation to be afforded by the new shops, we have every confidence in the success of the new enterprise, and must congratulate Mr Davies upon the energy displayed in pushing forward the preliminary arrangements.”

The group made a further announcement in November of the same year: 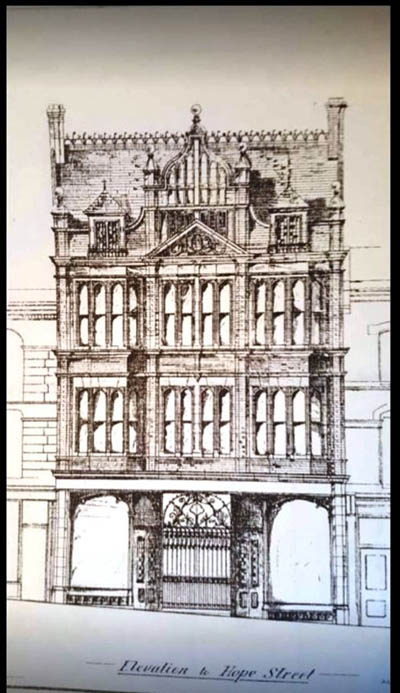 “The architectural designs show the erection of a handsome block of buildings, containing two shops in Hope Street, in addition to lock-up shops and offices. For these, there are numerous applicants. The project is an assured success, and we have great pleasure in recommending it to the notice of those desirous of making a first-class investment of a freehold character. There is nothing speculative about the scheme and the directors bring this forward as a really good investment, which will undoubtedly return a high rate of interest.”

“Mr Baugh, the architect, submitted and explained detailed plans and drawings of the new arcade. The Secretary intimated that the building plans had been before the Town Council. That this council had approved the plans, and that the group had advertised for the names of persons willing to tender for the erection of the building. And twelve builders had intimated their intention of tendering for the work as soon as the specifications were completed.

“The Secretary reported that the group had received several additional applications for shops, and it is intended after the letting of the tender, to press on the work with great rapidity.”

The Announcement of a Demolition

Additionally, they announced the demolition of Mr Charles Davies’ drapers’ shop on Hope Street to make way for the new arcade.

By November 1891, the new arcade was getting ready for business:

Anecdotally, there were several thefts from some of the shops and Mr Day’s tobacconists was a target on a couple of occasions, firstly in February 1892:

“A SILLY LAD. A small boy, who gave the name of Robert Williams, but whose proper name was said to be Robert Wilson Hughes, aged 12, was charged with stealing a box of cigarettes from the shop of Mr Day, tobacconist, in the Hope- street Arcade. Mr Day’s assistant said on the previous day, the boy came into the shop and asked to be shown certain articles.

“While ‘witness’ was getting others from his stock, he saw the boy take a packet of cigarettes, but before he could conceal them, ‘witness’ accused him of the theft.

He confessed to the offence, afterwards admitting having taken other articles. He subsequently gave the names of other boys who had done the same.

“On his own behalf, as well as for the protection of the tradespeople in the Arcade, he asked the magistrates to deal with the case, although as the boy was young, they did not wish to press the charge. The magistrates remanded the boy until Monday.”

The following week, Robert was back in court:

“Robert Wilson Hughes, aged 12, appeared on remand, Witness, having regard to the boy’s age, did not press the case. Mr William Williams, the boy’s foster parent, said he had chastised him and the magistrates, treating him under the First Offenders’ Act, discharged him.”

Two others didn`t get off so lightly later in June of that year:

“Two individuals, of some eleven summers, wished to learn to smoke. They visited the Central Arcade and abstracted tobacco and matches. The magistrates on Monday gave the order for a birching.

Please tune in next month for the conclusion to our story about one of Wrexham’s most iconic town-centre landmarks.

Annette Edwards did an incredible job of researching this article for wrexham-history.com.

We hope you enjoyed our Wrexham Central Arcade retrospective. To read more of our history articles about Wrexham town and county, click here.

From Coedpoeth to Colorado: One Woman’s Journey