Wrexham, North Wales: you might know it for its football team, its eponymous lager, but it’s slowly becoming known for something else… hip-hop music! 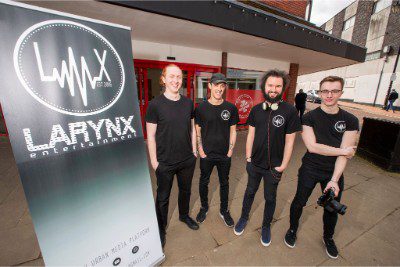 Founded in December 2018, Larynx Entertainment, originally comprising directors Pete Rogers and Dave Acton (both 27), are putting a spotlight on talent from across Wales through visuals, audio and live showcases.

Despite the rise of hip hop across the world, neither saw the same support for the art form as other genres of music when it came to gigs and opportunities in North Wales so they set about changing this. Finding inspiration in their hometown, they recruited freelance videographer Danny Edwards and set about showcasing their talents through a series of freestyles dubbed “Loaded Sessions”.

With their first video rapidly climbing to over 3,000 views and their next hitting 10,000, it was clear a gap in the market existed and they were more than happy to fill it! Not wasting any time, their first showcase was launched at Tŷ Pawb featuring local grime act Runic. Over 50 attended and Tŷ Pawb sold out of two barrels of beer (the real indicator of success)!
Tŷ Pawb Events Co-ordinator Morgan Thomas said “As a space for dialogue and important discussions, Tŷ Pawb proudly supports Larynx events and their ability to raise awareness of important social issues in a safe cultural environment.”
The success of a completely independent showcase highlighted the potential for growth and the team quickly brought on creative advisor Tim Humphreys Jones, the founder of Voicebox (the original inspiration and platform for Larynx) and sought to turn their passion into a profession.

Larynx Entertainment became the successful recipients of a micro-loan of £3,000 from The Development Bank of Wales which allowed them to expand their equipment, show sizes and future plans!

Anna Bowen, Investment Executive within the Micro Loan team, said: “We’re keen to support businesses wanting to make a difference in the local community and put Wales on the map, no matter the size of the loan.”

The team are based within The Wrexham Enterprise Hub which has also meant they have a free space to work from and are connected to other businesses in the centre of town. 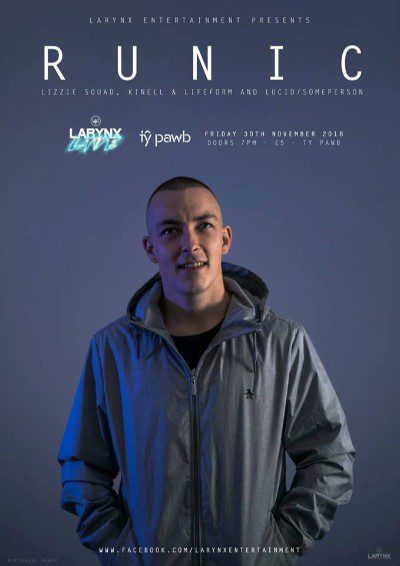 Since receiving their financial support, the team have successfully run several large-scale events. This has included creating a hip-hop stage and pairing Welsh artists with established international acts in collaboration with Focus Wales, providing support acts for known and respected acts Asteroid Boys and Mr Phormula, curating a hip hop stage for local talent for Wrexfest 2019 and running a successful 32-bars competition which brought together over 40 artists from across the country.
Their biggest move to date was bringing rapper Lunar C to Wrexham’s Tŷ Pawb in November.

Speaking about the gig, director Dave Acton said: “Wrexham has never seen a hip-hop act quite like Lunar C before and it marks Wrexham’s largest independent hip-hop show to date. We wanted to make it our mission at Larynx Entertainment to establish hip hop and grime in Wales and, in addition to the promotion of superb Welsh acts, such as Luke RV, Runic, Mr Phormula and more, we have paired some of the country’s most promising acts in the form of Organised Chaos and Skinny Bill to support one of the UK’s biggest acts in the genre in Lunar C.

From his undefeated streak in Britain’s biggest battle rap league, Don’t Flop, to his multiple appearances on Charlie Sloth’s Fire in the Booth, Lunar C has proved himself to be a heavyweight rapper, combining wit and comedic timing with punchlines that are difficult to rival in the UK. Having him appear at Tŷ Pawb this November was a monumental stride in Larynx bringing credibility to what we are accomplishing in Wales.”

This latest success doesn’t mean the team are taking their foot off the gas, not even close. They already have plans for early 2020 in regards to gigs and will be starting work on a brand new batch of Loaded sessions and music videos.

We’ll give Co-Director Pete Rogers the final word: “We are overwhelmed with the support we’ve received from across the country, but most of all we’re thrilled to see the people of Wrexham embrace our idea and show support for us whether that’s through gig attendance or sharing and watching our online content. It’s our hope that we’re setting an example of that where you start in life doesn’t need to dictate where you will end.

For anyone interested, Adam of Love Wrexham’s favourite hip-hop artist is Afrika Bambaataa. While Stefan thought hip hop was a medical procedure.

Another Great Year for Wrexham Carnival of Words

A Beautiful Garden on a Budget!

Are You Eligible for Support from the...

The Singer-Songwriter Who Traded the City for...