Mandola Hangover are a four-piece rock band based in Wrexham. They comprise Paul Ridgeway on mandola and guitar, Lee Fletcher on drums, Graham Geddes on bass guitar and Pablo Rinvolucri on guitar. We met Paul and Lee for a coffee recently and got to find out more about them.

Afternoon, Guys. Good to meet you. How did the name come about?

Paul: My lovely wife came up with that. It all stems from me playing the mandola, which is like a mandolin, but it has a deeper sound and is more versatile. She added the hangover bit because it sounded kind of catchy.

As far as the mandola is concerned, I was looking for something a bit different to play; something people weren’t familiar with. I’d tried an autoharp, but I was recommended a mandola by a guy in a music shop and that was it!

Your sound is quite rich and atmospheric; I was surprised to see there are no keyboards…

Lee: Yes, two guitars, bass and drums. Pablo’s guitar is responsible for the distinctive sound. He uses a guitar synthesiser and achieves the atmospheric sounds through that. Pablo also plays the trumpet on two tracks on the new album.

Tell us a little about the band’s history

Lee: The group’s been together for six years. Paul and I’d been friends quite a while and we used to practise in his shed and evolved into playing some open-mic nights at the Compass in Chester. I liked being a drummer because it means you can blend into the background! Our friend, Graham, the bassist, joined later and we played as a three-piece for a while. My wife knows Pablo’s wife and he joined us on guitar so we’ve been a four-piece since 2013 and that coincided with us getting a different sound.

We’d played mostly with an acoustic guitar and thought that as we sounded a bit flat and lifeless, we needed to fill out the sound and become a bit more textured. Pablo bought a pedal board to change things around and that’s why we sound entirely different to how we used to.

Paul does all the songwriting. He and Pablo develop it a little further, Graham will add his parts and then I will add mine.

Paul: Yes, we are fans of Lou Reed. Bowie, Peter Gabriel and the Talking Heads have also influenced us.
I’d sum it up as it being like a big pot with lots of different influences and over the years, they just all got stirred up together with a sprinkling of ourselves in it. We don’t want the band to be rigid, we just want to go in any direction we feel comfortable with. We don’t want to end up like another Status Quo where we’re playing the same stuff we were playing 20 years ago.

Lee: The artwork on an album is significant too. Our generation of listeners, around 30 to 40, grew up with vinyl and the front cover, gatefold and inner sleeves were all significant parts of the album.

Each song we write tends to have a different topic… for example, Paul loves history, but has a dislike of some technology, especially mobile phones!

When you write a song, are you aware of the limitations you might have playing it live?

Paul: Yeah, we’ve levelled that side of things out. Graham is more conscious of that than me. I’m prepared to go wherever my imagination takes me and I would quite like to play with an orchestra one day though. They do seem quite in fashion and a lot of bands have played with one like Peter Gabriel and Metallica.

I do like some diversity though; have you ever heard of the Penguin Café Orchestra? They were a guitar-cello duo from the 70s and were a cute, quirky take on an orchestra.

I see there’s a song about Ernest Shackleton on the album!

Lee: As we’ve mentioned, one of Paul’s strong points are his lyrics which always tell a story. You can hear that particularly on two tracks – City of Stars and Miss You. City of Stars is one of my favourite Mandola Hangover songs: It’s about Marc Bolan’s missing millions and my favourite line is ‘Though they bleed you dry, your music will live on’.

Paul – hah, my favourite song is always the most recent one I’ve written! 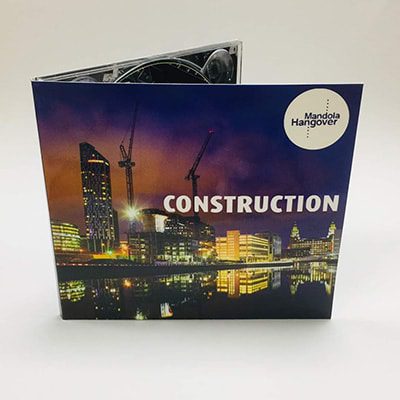 Talk a little about your new album, Construction.

A job I did in the East End of London inspired the song Bow Quarter Women. There was a match factory there and the song is about the women who had to endure the horrendous conditions. It was about 20 years before the suffragettes and the whole situation reminded me a lot of the circumstances that led to the Peterloo Massacre in Manchester.

What was the first concert you went to?

Lee – Madness at the Empire in Liverpool.

Paul: my first concert was T Rex at the Manchester Free Trade Hall and my first album was by T Rex too!

Lee – I can’t remember my first album, but my first single was Tom Hark by The Piranhas. I bought it from Cranes Music in Wrexham – where BrightHouse is now.

Paul – I remember a lot of my musical ideas coming from when I used to go to Eric’s on Matthews Street in Liverpool. It was like the Cavern of the 80s. I quite like Womad (the World of Music, Arts and Dance Music Festival). I went to the first one and that was the best festival I’ve ever been to. My favourite live act was The Talking Heads, but my biggest regret is missing Peter Gabriel. We went to Lake Garda and Verona on holiday. There’s a Roman amphitheatre there and he’d played there a few weeks with an orchestra and I missed him! They did a cover of Heroes apparently and it’s completely different and so good… and I didn’t see him. 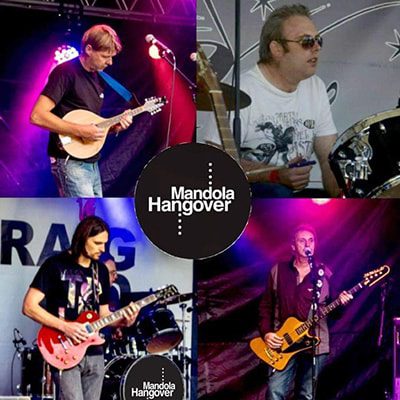 Do you guys have day jobs, then?

Paul – I’m a builder. Pablo and Graham work in a factory. We’d love to be able to jack in our jobs and play full time. It’s what we’ve always wanted to do.

When’s the next album coming out? The ‘difficult’ second album

Well, we’ve written three songs already and there’s a lot of old stuff we could revisit.

So no double concept album or anything like that in the works?

Paul – (laughs) – we’ve done three EPs and I do like concept albums so you never know. An idea I’m always thinking about is for a song called Thesis. Apart from being fascinated by buildings, I love history and Thesis is about a submarine which sank just off Llandudno.

I need something substantial to get my teeth into when I’m writing a song. I can’t just do a song about something like ‘De Do Do Do, De Da Da Da’, but don’t get me wrong, I like the Police!

OK, great! Well, we won’t keep you any longer. Thanks very much and good luck for the future. 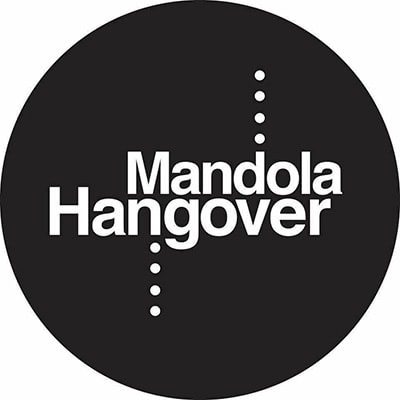 While Away Your Winter in Welsh

The Singer-Songwriter Who Traded the City for the...

Poet Extraordinaire On A Mission

Jack And The Beanstalk