Bosses from a North Wales-based independent travel agency partied with Peter Andre after scooping a top award for the third year running at a prestigious industry conference.

Don Bircham and Lindsey Barber of Hays Travel North West, which has its head office in Lord Street, Wrexham, and runs stores across North Wales, including Rhyl, Colwyn Bay, Mold, Flint and Connah’s Quay met the Mysterious Girl singer at the Jet2 VIP conference for independent travel agents held in Calpe on the Costa Blanca.

This three-day conference recognises the hard work and commitment of independent UK travel agents. Hays Travel North West took one of the main prizes during the awards evening for the best large independent travel agency in the UK winning it for the third consecutive year.

They received their award from the performer and went on to enjoy a fancy-dress party and the awards gala dinner. 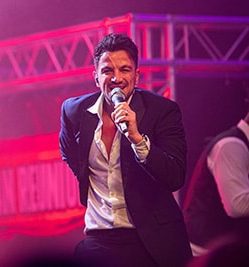 Don, who set up his business in 2000 with one store in Mold, North Wales, now runs almost 40 stores across the North West and North Wales region, said: “Peter was fantastic and really great fun. He sat next to us on the plane over and then we sat on the same table with him at the awards dinner. He came across as a genuine guy and we talked about all sorts, including our families. He told me about his own and how much they meant to him. He said how he came from a very stable and loving family which helped him with the demands of fame.

“What struck me is that he took a real interest in the people there asking them all sorts and talking about his own life, which of course we were very interested in!”

Lindsey agreed: “He was lovely; so polite, sociable, professional and caring. He seemed really interested in everybody and asked us all about what we do and where our shops are. He mixed in with everybody and had no airs or graces whatsoever. It was a pleasure to meet him.” 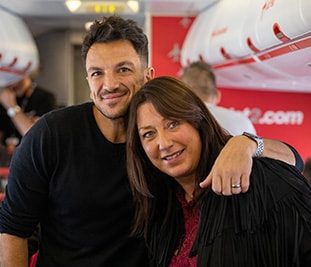 Don and Lindsey were joined by Regional Manager Toni Smith and the manager of Hay’s Maghull store in Merseyside, Emma May. They were among more than 300 top-performing agents Jet2 took to the AR Diamante Beach & Spa.
Hays Travel North West, the principal partner of Hays Travel, is based in Sunderland and is the UK’s largest independent travel agency. The owners, John and Irene Hays, recently took over all 555 Thomas Cook stores following the collapse of the well-known travel brand.

Don said: “The Hays Travel brand goes from strength to strength and winning awards like this underlines our commitment to providing top-class holidays from reputable operators such as Jet2. It highlights that we have a valued relationship with one of the UK’s largest tour operators and our support for them ensures we can offer the best range of holidays to our customers.”

Lindsey added: “The award recognises the hard work of the whole team in working with operators such as Jet2 to ensure the best spread of holiday options possible for our valued customers.”

A Dog Isn’t Just for Christmas

How To Go Greener With A Nest Learning...

Now Is the Perfect Time for a New...

Tons of Family Fun in Town!

The North Wales Foodies Have Been Out...