In 2016, The Welsh national football team exceeded expectations by reaching the European finals in France.

Players of the calibre of Gareth Bale, Aaron Ramsay, and Ashley Williams fulfilled their potential under the guidance of Chris Coleman and Osian Roberts. 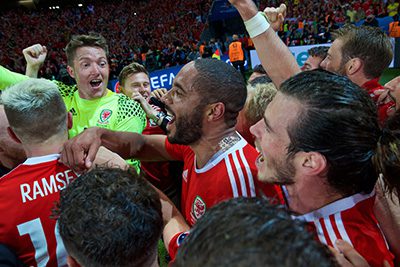 The success of Ryan Giggs’ “new squad” in reaching the Euro 2020 finals culminated in two 2-0 victories away to Azerbaijan and at home to Hungary in front of a packed and euphoric crowd at Cardiff City stadium.

In the past decade, there has a remarkable transformation in the success of the Wales national team. Competing at the 2020 European Championships will be our second major tournament in four years following a barren period between Wales’ appearance at the 1958 World Cup and the achievements of the “unsung” heroes of 1976.

A key feature of the success of the new squad is the emergence of more experienced Welsh players, such as Bale, Ramsay, Ben Davies, Joe Allen and others with Premier League experience. In addition, the excellent coaching and scouting framework established within Wales has resulted in the emergence of a wealth of outstanding young players with potential. These players include Daniel James, Ethan Ampadu, Harry Wilson, Ben Woodburn, Joe Morrell, Connor Roberts, Tom Lockyer, David Brookes, Neco Williams, Rabbi Matondo, Matthew Smith and many others (what a pity Curtis Jones isn’t Welsh!). Added to this wealth of talent, we have the power and drive of the new leader of the forward line, Kieffer Moore, who has transformed the aerial power of the Wales team and added power and determination up front. Undoubtedly, football success with the national team in Wales is no longer a pipe dream, but a real possibility.

Photos by kind permission of FAW