They say beauty is only skin-deep, but this couldn’t be further from the truth for the current Miss Wrexham, Ebony Banks. We chatted to her about representing Wrexham at the Miss Wales 2019 pageant, her role as the Vice President of the Student Union at Glyndŵr University and all the community initiatives she is involved in.

What do you study here, Ebony? 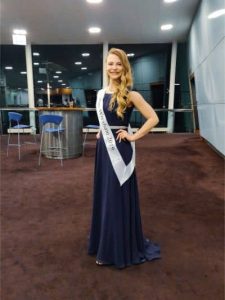 I’ve just completed my undergraduate degree in Hospitality, Tourism and Events Management, which I got a first-class Honours Degree in and I’m now doing my master’s in business administration, part-time for the next two years. My plan is to do the vice-presidency this year and run for president next year.

I won a national scholarship award called the Vanessa Cotton Scholarship award in conjunction with the hospitality degree. It’s a national competition run through a company called Meeting Professionals Internationally, UK and Ireland. The prize is a month’s paid internship with Reed Travel Exhibitions, based in Richmond so I was working in London most of September.

What do you envisage yourself doing after your studies?

I’m still uncertain about that. There’s such a variety of jobs and careers out there that it’s going to be interesting to see what is available. I’ve found that university opens different doors and routes to you as you go along.

I keep saying the same thing to my daughter who has just started a foundation year here at Glyndŵr. 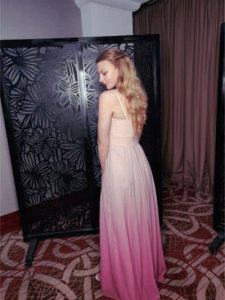 Foundation degrees are fantastic. I did one myself. They give you such a solid base – when I went onto my full-time degree, I already felt like I was two steps ahead of the students starting their first year so she’s made a good choice, I think.

What are your responsibilities as vice-president?

Every year we have elections for the two full-time paid positions we have in office – the presidency and vice presidency. In March, we run a week-long campaign which involves going out and speaking to as many students as possible, doing posters, flyers and as many things as you can to grab the students’ attention. You catch up with them, get the conversation going and hopefully encourage them to vote for you. It’s tough!

I sit on the Board of Governors for the university as part of my role. This is interesting because I attend meetings and make decisions about how the university runs and operates. I also sit on pretty much every body within the university, for example, The Learning Teaching Quality Committee, where they go through the teaching and academia side of the university.

All in all, my role is about making sure students have a voice within the university and that Kieran, the President, and I are representing the students and ensuring that any decisions made about the operations of the University are in the best interest of the students.

When I ran my campaign, I created a manifesto which involved the introduction of animal therapy and a way of improving mental health on campus. On the back of that, we now work with a company called ‘Critterish Allsorts’. They have every type of animal imaginable: cats, skinny pigs (a form of hairless guinea pig), a hedgehog, snakes, millipedes, everything. My aim this year is to bring them in around the key areas where mental health is a potential issue, during exam time in January, for example.

I’ve also been trying to make the university eco-friendlier and I sit on a committee which is purely focused on the environmental sustainability of the university.

Something we’ve just brought in was to charge 20p for paper cups in the coffee houses here. The money we raised has paid for a range of free reusable cups which have been given out to first-year students when they enrolled. This is a really simple way of making sure we’re cutting back on our waste. I’m working with the university and the student union on a food waste management project and potentially linking that to the local community to ensure that as a university we’re doing our best to make sure that food isn’t going to waste.

I read on the University website that you were a Wrexham Glyndŵr University Insider. What did that involve? 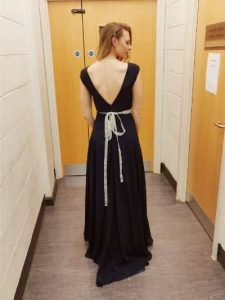 My role was to post on the Glyndŵr Instagram page to give students a real taste of what life is really like at the university. It was one of the most fun things I’ve done just because of the number of messages I received from students. I would tell everyone to come to an open day and give it a go. There was one girl in particular who sent me a few messages and I recommended the university saying “Just trust me, you’ll enjoy it”. She’s now she’s in her second year and every time she sees me, she comes over and says hello and thanks me because I helped her make her mind up.

How did Miss Wrexham come about? I mean, apart from the obvious requirement of having the right looks, how does one get into that?

The idea of taking part in a pageant had always interested me and my sister competed in Miss Staffordshire a few years ago. I remember going to watch her and thinking I hadn’t got the confidence to do that. It wasn’t until last year in September that I saw the Miss Wales competition come up on my Facebook and I thought, you know what, if there’s anything in the world that’s going to hold you back, it’s yourself so just let go of that and try it; you never know what’s going to happen.
I sent in an application with a picture and why I wanted to compete. A couple of days later, I was invited to an interview and soon after that, they told me I’d been accepted into the competition representing the Wrexham area so I was delighted with that.

When you find out that you’re a finalist, you have quite a lot of stuff to do. First, you need a sponsor. I raised £263 for ‘Beauty with A Purpose’, a charity that ensures all money raised in Wrexham is redistributed into local charities. The same goes for the girls from Cardiff and Swansea – the money they raise, even though it’s raised for Beauty with a Purpose, goes back into their local areas – that was important to me.

The competition was held over three days. On the first day, we attended an ‘Empowerment’ session run by a gentleman called Jermaine Harris. It was one of the best things I’ve ever done in my life. We walked on broken glass and punched through wooden boards with our bare hands! It was all about understanding there are no limits to what you can achieve and that it’s all down to your own mindset. I think that’s something I’ve kept very close to me since that day. I left feeling as though I could stop a bus with my hand, it was fantastic.

We had rehearsals for the grand finale the following morning and the charity ball in the evening. This included all the awards for Miss Wales like ‘Spirit of Miss Wales’, most fashionable person and who raised the most for charity. That was wonderful and a great opportunity for all the competitors to enjoy themselves and savour the moment.

The next morning, we had dress rehearsals from 8.30 and the actual show started at 7 o’clock in the evening. There are three rounds: the first one you wear a Welsh flag themed dress and do a pompom routine to Shirley Bassey’s ‘Get the Party Started’. After that, you have a round with a Welsh dragon theme where every girl wears a red dress. The final round is the formal wear round, where you put on a fancy frock and you do the walk. It’s a fantastic event!

The winner, Gabriella, thoroughly deserved the title. She is an amazing person inside and out and put so much hard work in and showed so much dedication – she is an ambassador for Women’s Aid, finished in the top 14 in Britain’s Next Top Model and had competed in Miss Wales twice before.

Personally, just to be recognised as Miss Wrexham and coming away with the sash was a huge achievement for me considering it was my first ever pageant.

I think I already know the answer to this: Would you recommend pursuing beauty pageants? 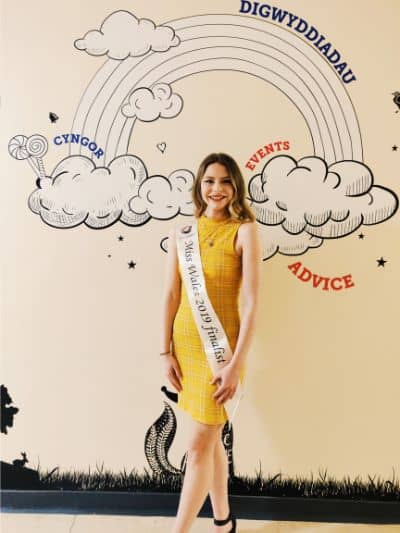 Definitely. There are so many misconceptions about it – a lot of people think it’s all about being a pretty face, but it is so much more than that. There is a real philanthropic core that runs throughout pageantry and every girl that competes is doing it for a good reason, be it raising money for charity or wanting to do good for their community.

Some press reports are quite negative and claim that beauty pageants don’t have a place in modern day society because they’re deemed non-feministic whereas, if anything, it is the complete opposite. I have never been in a room full of such supportive women, it’s immense. Paula, who runs the Miss Wales competition is one of the biggest feminists I’ve ever met and she sees the best in every single girl that walks through that door.

Did you get to meet any other famous people as part of it?

No, sadly not although I can say that I know Miss Wales 2019! If I’m being honest, I think she’s in with a very good chance of becoming Miss World. I have seen she’s been doing very well; she’s been rated highly on Instagram and they have different pageant pages which feature the top picks for Miss World and every single post I’ve seen has had her in the top five.

You mentioned earlier that it was her third time. Would you do it again?

I don’t know. I’m sure that part of me would really like to, but there’s also a part of me which is wondering whether I should explore other pageantry options like Miss Grand Wales or Miss International. I’m very tempted and you never know what the future holds.

Wonderful – let’s finish with that. That was brilliant and thank you very much for your time.

Do You Know? Wrexham Special

‘Yule’ Love Our Guide to a Welsh-Speaking Christmas!

Everyone Deserves A Christmas – Update!

Economic-Resilience-Fund Eligibility Checker Up And Running