‘The game’s afoot’ in the world of Wrexham county schoolgirls’ football as programmes to promote under-13 and under-15 teams gather momentum.

Rebecca Suckley, County Secretary, takes up the story: ‘We have recently had trials at Ysgol Morgan Llwyd on Cefn Road and set up the first Wrexham County Football School teams for the age groups of U13 and U15.’

Those successful made a little bit of history when they represented our county for the first time, pitting themselves against the best of the rest of North Wales in the Welsh Schools’ FA Competition.

In addition to the trials that have already been held, there’ll be more in June so keep an eye out on Facebook, Twitter and your local schools for more details.

Rebecca reinforces this by adding ‘This is a massive opportunity for all girls who attend Wrexham high schools and who enjoy football. They can make new friends and it is so good for their health and well-being.’

The trials are open to all Wrexham schoolgirls and are split into two age groups: girls from school years seven and eight go into the under-13s and years nine and 10 form the under-15s.

Rebecca continues: ‘It’s always surprising how many girls just don’t come along because they don’t think they’re good enough, but we’ve seen that there are many hidden talents. For example, one girl, Cadey Jones from Bryn Alyn school, made it through to the national trials and will start for Wales under-13s in their upcoming game against England! There isn’t a Welsh under-15s national team as yet, but that is something that might be created later this year.’ 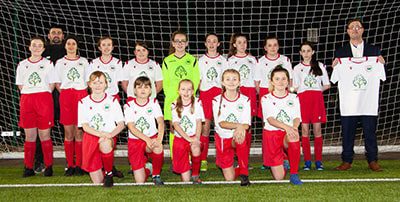 The under 13s compete in a mini three-team league against Flintshire and Denbighshire. The under 15s are in a four-team one since Powys also have a team in that age group.

The under-13s have one game remaining against Flintshire which they must win to have a chance of progressing through to the next stages in which they will play the third-placed team in the South Wales league, most likely Swansea or Cardiff And Vale. The under-15s are only just underway in their league and are drawn one, lost one after two games, but it’s early days yet!

Rebecca again: ‘There’s never been a Wrexham schoolgirls’ organisation before because they had struggled to find coaches like me who do all the admin work as well. We realised we couldn’t get into the North Wales tournament without a proper county side which had followed procedures and gone through a trial system so I decided to take up the mantle.

‘We have kindly received sponsorship from two local businesses for the under-13s team: Commonwood Fishery in Holt and Mark Harvey Construction. We featured in an article in the Leader as well and this attracted sponsorship for the under-15s from Top Nosh Catering, Rhosddu; M&N Davies Car Sales in Holt and The Development Bank of Wales. Macron have even helped with discounts on the supply of a nifty new kit!’

Marc Francis, Commonwood Fishery manager, said: ‘We were delighted to have the chance to sponsor the Wrexham Schoolgirls’ football team. We believe in backing local community and grass-roots projects and this was a perfect opportunity to give something back and get behind our county schoolgirl team.

‘Here at the fishery, we are committed to supporting local schools and colleges by offering our facilities to engage their pupils in all things fishery-related. We look forward to seeing how well this group of talented young girls get on and wish them the best of luck.’

For anyone interested, there is a girls-only training event held every Thursday at 4.30pm at Colliers Park, Gresford. It caters for girls of ages 5-11 and costs £3 per session. There are also two grass-root teams in the area: Brickfield and Brymbo.

Brickfield train at Clywedog Park on Homestead Lane while Brymbo use the Solway Banks playing fields.

Anybody wishing to find out more about what we’ve mentioned above can contact Rebecca on 07702 736 962.