Historical, mythical and living legends of Llangollen were celebrated in a unique art project as part of the town’s Fringe celebrations helmed by Glyndŵr University staff and students.

The ‘Massive Heedz’ project was initially conceived as a live-action spectacle by Ali Roscoe, Lecturer in Fine Art at Wrexham Glyndŵr University, and Alec Shepley, Dean of the Faculty of Arts, Science and Technology. The project would have taken part as part of the annual Llangollen Fringe celebrations.

However, as the coronavirus pandemic put events on hold across the country, a decision was taken by the Fringe to adapt this year’s event to become a festival people could take part in online and this meant some major changes to the Heedz project.

Chris Stone, a member of the Fringe organising team, explained: “There was a big plan for this year’s project where we would be developing ‘Massive Heedz’ for people to wear and there would have been a parade through the streets. However, for obvious reasons, that had to go online – like much of the Fringe.”

The change to the Fringe’s plans came as preparations were underway for its 24th season, which would see, as ever, a mix of arts, music, theatre, comedy, storytelling and much more. Public-health restrictions meant that much of the planned programme could not continue in the usual fashion. 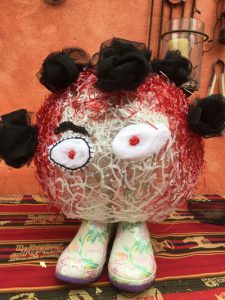 However, as Chris added: “A lot of things still went ahead – just in a different way. For instance, there has always been a storytelling aspect and people got together and told stories at three High and Mighty Tall-Tales events online – they didn’t even have to climb Dinas Bran as they have in the past!

“There was a comedy session produced by one of our local comedians, Silkie, who does a lot with the comedy club at the Town Hall and a fellow comedian called David Eagle. My daughter held a circus skills session. There was a band-for-the-day session, which brought together individuals who are not in groups and got them to play as part of a wider band. Again, this was all put together online.

“Plus, of course, there was the Massive Heedz project.”

For this project, participants were invited to consider ‘Legends of Llangollen’ that could be celebrated in art.

Chris added: “They could be historical legends of the town or they could even be living legends. People then created a portrait of that person’s face or head. This portrait could be a very simple thing or very detailed – it entirely depended on how the artist was feeling. We didn’t require people to be highly trained artists – everyone was welcome and the main thing was for people to have fun! 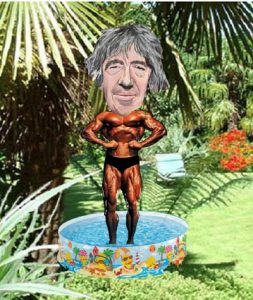 “They then sent us through a full-body image of themselves somewhere interesting as well as the portrait of their legend as a separate picture and a short paragraph explaining their choice. These were combined and we created an online Massive Heedz portrait gallery!”

Ali Roscoe, Lecturer in Fine Art at Wrexham Glyndŵr University, said: “The plan for the portrait gallery was to bring together the images sent in to create these legendary characters by enlarging the ‘heedz’. These characters were of course ‘legendary’ to the creators themselves.

“Next, with the help of our Fine Art students, my fellow lecturer Paul Jones and artists’ collective Datamosh, they were transformed into an animation.

“This project is now one of two parts – with the second part planned to take place next year, which will see us make Massive Heedz for people, which was the original intended brief.

“When that happens, our Fine Art students will collaborate and help to make the Massive Heads alongside students from Ysgol Dinas Bran and their teacher, Ali McDonald.

“And hopefully, during the Llangollen Fringe Festival 2021, the Massive Heedz will appear in a celebratory opening parade!” 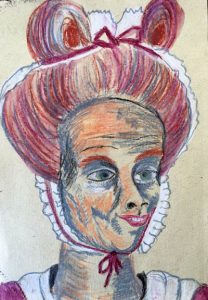 Anne Hill – a BA Fine Art student at Wrexham Glyndŵr University – is among those who helped bring the project to life.

She added: “Having been involved with the Fringe through Wrexham Glyndŵr over the past two years, I was keen to continue my links with my fellow artists in these projects.

“This year has been different, but having adapted to using social media to share my degree show, this felt like an extension of that concept and hopefully next year, we will get to show our Massive Heedz for real!

“Last year, as well as helping the pupils at Ysgol Dinas Bran produce artwork for the Fringe, I was a storyteller, sharing the information about the Legend of St Collen. And so my Massive Heed, Bras, was one of the colourful characters from the Legend. 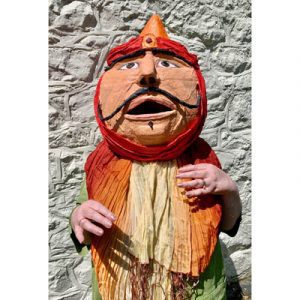 “Some of us have been creating physical examples to show what is possible for the future – although we are now asking others just to design Heedz.”

Links Between Llangollen and Wrexham

Chris added: “It has been good working with Glyndŵr – Alec has been very helpful and Ali brought everything together with a light touch. It’s great to have students from the school taking part – you have the links between the school, the university and the things happening in Llangollen town centre through the Fringe.

“I also like the range of students of all ages that Glyndŵr brought to the project. By working with Glyndŵr, we are developing those links with Wrexham and with the various towns and cities, the students at Glyndŵr have come from. It all helps to link Llangollen and our events to the wider world.”

The Llangollen Massive Heedz project is available to see on Instagram at instagram.com/llangollenmassiveheedz/

To find out more about Llangollen Fringe, visit: llangollenfringe.co.uk/index.php/en/

Reply Retweet Favorite
In the light of the strain on the NHS during the Covid pandemic, now more than ever, our attitude to self-care has… https://t.co/pn1I0nDtke

Reply Retweet Favorite
Zero Dry Time! Ready for Your Best-Ever Clean? Our equipment and products have been upgraded to kill Log-7 - 99.999… https://t.co/YHN1KqnPKN

Reply Retweet Favorite
If you're looking for top-quality granite or quartz worktops for your kitchen, look no further than the lovely Ange… https://t.co/PfXQ6BKNIb